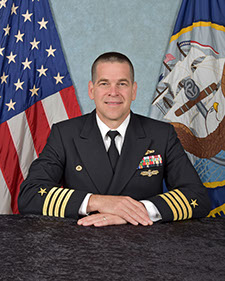 Born in Oregon, Captain Ettlich grew up outside of Sacramento, Calif. He joined the Navy through the Nuclear Power Officer Candidate program in February 1993, while attending the University of San Diego (USD). Capt. Ettlich graduated from USD with a Bachelor’s in Electrical Engineering in June 1994. He went on to be commissioned through Officer Candidate School in September 1994.

His Junior Officer tour was on USS Alaska (SSBN-732 Blue) from February 1996 to June 1999. After his sea tour, he reported to University of Arizona's (UA) Naval Reserve Officer Training Command to teach Naval Science courses and counsel prospective officers. While at UA, he transferred to the Engineering Duty Officer (EDO) community and completed a Master's in Business Administration.

In August 2001, Capt. Ettlich reported to Naval Postgraduate School where he received dual

From 2006 to 2009, Capt. Ettlich served as the Department Head (Planning Officer) for the Planning Department at Naval Intermediate Maintenance Facility Pacific Northwest at Bangor, Wash. At the end of his tour, he completed an eight-month Individual Augmentation with the U.S. Army Corps of Engineers at its Gulf Region Division in Baghdad, Iraq, as a program manager for reconstruction projects.

Capt. Ettlich served as Repair and Logistics Officer at Commander, Submarine Squadron ELEVEN (CSS-11), in San Diego from June 2009 to June 2011. Following his tour at CSS-11, he transferred to Naval Sea Systems Command (NAVSEA) as the Director of Submarine Safety and Quality Assurance, NAVSEA 07Q, from July 2011 to August 2014. From September 2014 until August 2017, he served one year as Business and Strategic Planning Officer at Puget Sound Naval Shipyard and Intermediate Maintenance Facility and completed his tour as Operations Officer.

Capt. Ettlich was previously assigned to NAVSEA as Military Deputy for Shipyard Operations until assuming command of Portsmouth Naval Shipyard on August 9, 2019.